Very often, we take for granted many of the everyday objects found around our homes that we nonetheless depend on for our lifestyles.

Let’s take a look at this interesting and little-known History of the Clothes Hanger.

Clothes Hangers preserve and protect some of your most expensive, valuable items. Many of your articles of clothing are always wrinkle-free and ready to wear. What most people don’t realize is that hangers have a fascinating story, beginning with their invention in the 1800s. What is more, they have continued to evolve through the years since they first appeared on the market. Let’s dive into the History of the Clothes Hanger.

The Hanger is Born

If you do some digging, you might read that Thomas Jefferson, one of the Founding Fathers of the United States and its third president, invented the clothes hanger. However, this fact is of dubious credibility. While undoubtedly a brilliant and resourceful man who invented a new style of plow, a macaroni machine, and a revolving chair, Jefferson’s version of the hanger bears little resemblance to what we consider a hanger today.

Instead, the first modern hanger was probably invented by a man named O.A. North in 1869. While living in Connecticut, he submitted a patent application for a device featuring a hook on top and what resembled shoulder supports for clothing to the right and left of the hook. Around the same time, others also submitted patents for somewhat similar contraptions.

During the remaining years of the 19th century, more households began to utilize hangers. They became more important with the growth of the middle class and the increasing number of people working as professionals rather than laborers. These people (mostly men) included lawyers, clerks, accountants, and businessmen, and they wore suits to work. They needed to look fresh and well-pressed, but very often did not have the household staff to iron their clothes each day.

For the most part, these early clothes hangers were made of wood.

Continuing the History of the Clothes Hanger journey, at the very beginning of the 20th century, the hanger evolved to more closely resemble the tool we use today. In Jackson, Mississippi, a man named Albert J. Parkhouse worked at the Timberlake Wire and Novelty Company. While there, he figured out that a piece of sturdy wire could be twisted to form a useful contraption for hanging clothes, especially coats.

His shape featured two ovals on either end, twisted in the center with a hook shape at the top, which was perfect for attaching to a bar, wall hook, or any number of other places.

After Parkhouse’s design caught on, other companies and individuals kept on making improvements to it. In order to make hangers stronger and sturdier, some people began adding wooden reinforcements in the middle especially. Remember that the wire was bendable, and clothing tended to be heavier in the early 20th century than it is today.

The year 1932 was another important evolutionary moment in the History of the Clothes Hanger. A man named Schuyler C. Hulett added inexpensive cardboard to the wire in order to further prevent wrinkling. To this day, many (if not most) dry cleaning companies still use a version of this wire and cardboard design.

Two important developments in the History of the Clothes Hanger occurred in the 1960s. First, in 1965, Gerhard Wieckmann patented a new hanger design with a wire hook and wooden frame. His innovation prevented wrinkling and solved some other issues with the older design.

The second was in 1967, when J.H. Batts patented an inexpensive molded plastic hanger. While plastics had been invented much earlier, they really took off in the 1960s. This not only made the manufacture of items such as hangers easier, it also made them less expensive to produce and sell. It was around this time that hangers truly became an essential tool in almost every household in America.

As is often the case, a single invention can cause a cascade of other innovations and changes. It was not until after the clothes hanger really caught on that closets became such an important feature in homes, something that we couldn’t dream of not having in houses and apartments today.

Since the 1960s and the emergence of the plastic hanger, we’ve seen more developments, including hangers designed to hold multiple items of clothing, hangers specifically made for particular articles or types of clothing, and more.

There are even luxury and custom-made hangers. Perhaps more importantly, we also have heavy-duty hangers to handle large items. For example, Tough Hook hangers can hold 150 pounds on a single hanger. This innovation is even more impressive when you know about the humble beginnings and slow evolution of the clothes hanger itself. 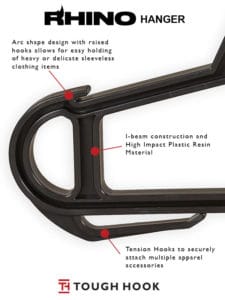 History of the Clothes Hanger Resources:

Use a Hanger to Declutter Football Gear in Locker Rooms

Tips to declutter your team’s football locker with one of the most simple tools you can find: a hanger.

END_OF_DOCUMENT_TOKEN_TO_BE_REPLACED

If you’re a member of the police force or the military, you already know how important it is to take good care of your tactical gear. Let’s take a look at the Amazing Tactical Applications of a Tough Hook Hanger

END_OF_DOCUMENT_TOKEN_TO_BE_REPLACED

One thought on “The Amazing History of the Clothes Hanger”

1000's of 5 Star Ratings "The Strongest, Toughest, and Most Durable Hangers On The Planet" USA Made-Lifetime Warranty

CYBER MONDAY Sale: 23% Off  - Use Coupon Code: CYBERMONDAY23 at checkout!